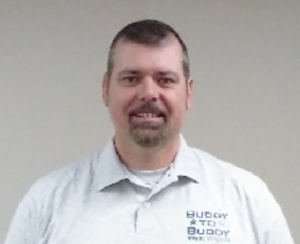 Aaron Hammitt is the Program Coordinator for the West Virginia Buddy-to-Buddy Program. He is responsible for the day-to-day operations of the program, the oversight of volunteers, community outreach, program awareness, volunteer management and progressive program expansion.

Mr. Hammitt is an Army Veteran, serving from 1994-2016.  His military career is comprised of serving within the U.S. Army, U.S. Army Reserves and the West Virginia Army National Guard.  Mr. Hammitt retired as a Master Sergeant within the Military Police Corps.  During his military service he worked as an Infrastructure Operations Specialist in support of Critical Infrastructure Protection, was selected to perform as a Senior Instructor for the Department of Homeland Security and served as a Drill Sergeant in a Basic Combat Training Brigade.  His military tour of duties include Fort Belvoir, VA; Guantanamo Bay, Cuba; Fort Clayton, Panama; Camp Coiner, South Korea, and Iraq.